This page is a Work in Progress.

Comment: Still work-in-progress so this page will be unreliable because I do alot of changes

Assault Teams are the smallest group of players in the game. Creating and joining an assault team is the easiest way for players to play together with friends.

Only Assault Teams are able to initiate attacks, whereas Strategic Commands are used for logistic purposes. Reserve Units (like men and tanks) are assigned directly to the assault team and used in combat. The assault teams have a limit to its size depending on its type.

Assault Teams are categorized into strict types that gives access to different specializations allowing use of special weapons and vehicles.

When an Assault Team is attacked, all friendly players can join the battle. They will need to have a character that fits the Assault Team's specialization though.

When a player joins a mission he is assigned to the assault team conducting the mission. The player can then choose a character class to play from the available character slots dictated by the type of Assault Team. If he have a character that fits any of the slots (like a machinegunner) he can choose his own character instead of the default one.

All players can create an assault team when they have the required funds and an available slot. The Assault Team is 'under formation' (inactive) until it have received army-resources from it's superior command. New assault teams are deployed close to the team's capital.

Ground based Assault Teams are moved between battlefields on the campaign map following the supplylines. Airborne Assault Teams can only move from airfields to airfields but move quickly and in a direct line.

Ground based Assault Teams attack by moving up to a battlefield and initiating an assault. Airborne Assault Teams can attack any visible enemy assault team/transport within their range. When all units are killed in the assault team, the team respawns at HQ. 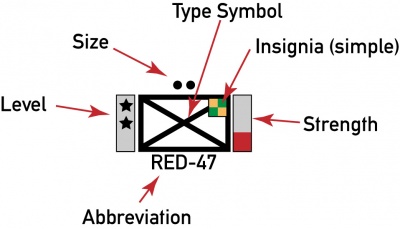 The icon shows several characteristics of the assault team.

Assault Teams can be upgraded to enable more advanced weapons and vehicles.

Each assault team that participates in a battle is rewarded with certain amount of warfunds. The basic formula for this is

p is the participation bonus for the team from the table below, and

v is the victory bonus (only if the team was on the winning side, otherwise v = 0)

The table below gives values for these participation and victory bonuses depending on the Assault Team type.

Rewards are calculated the same way for played battles as for auto-resolved battles.

Your AT's income for a given battle is the difference between battle rewards and the cost of deployment. Your income will fall somewhere in between two scenarios:

All values are in warfunds unless otherwise indicated.